Recent months have brought several reports of Indian Muslims being arrested and deported back from the Middle East or, as in January, arrested by Syrian forces while attempting to cross into ISIS-controlled territory. One Indian Muslim has now joined ISIS in Afghanistan. 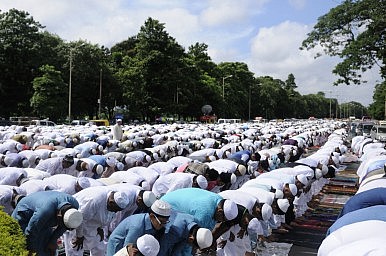 For comparison, a hundred Syrians are now reported to have overstayed their visa period and have “disappeared” inside India. Indeed, the number of Muslim men from India joining ISIS is negligible when compared even with the U.K. and other European countries. But the growing influence of radical ideas in a country with over 150 million Muslims (the third largest in the world) has long been flagged by security experts as cause for concern.

The worry is that what al-Qaeda could not achieve ISIS can: attract Indian Muslims through social media and win new supporters. Over the decades Saudis used Zakat money (Muslim aid) to build new mosques and seminaries in India that have radicalized younger Muslims and put them on an ultra-conservative path.

A growing number of mosques, madrasas and educational institutions are funded by Saudi Arabia, and the rising number of followers of Islamic sects that are more conservative and exclusivist in nature poses new challenges. Wahabis and Salafis are attracting new followers and supporters in parts of India where Islam in practice has traditionally had South Asian cultural traits. States in South India with better education indices and economic wellbeing seem to have more sympathizers among younger Muslims.

For decades Indian governments remained indifferent to Saudi funding; critics of unregulated growth of Islamic schools and presence of Wahabi teachers from Saudi Arabia, Egypt and other Gulf countries were branded alarmists. The division of India in 1947 and the creation of Pakistan saw political debate in the country acquire a “Muslim restraint” where governments steered clear of “interfering” in activities of Muslim communities.

Much changed after the 9/11 attacks in the U.S. and the Hindu Right wing acquired greater strength and electoral support to question the reluctance of governments to discuss even the issue of foreign funding of Islamic trusts, mosques, universities and seminaries.

Subtle and explicit efforts to influence Indian Muslims and push for an Arabized version of Islam have made considerable headway in parts of the country.

The growing pressure being applied by Wahabis and Salafis, pushing their ultra-conservative ideology, has disturbed sections of Sunnis (in a majority among the Muslims) in India. A few months ago some of its leaders sought government intervention to check its spread.

The Sunni religious board fears that Wahabis could take over a majority of Sunni shrines and Dargahs, allowing terror groups like ISIS inroads into the country. Wahabi clerics and preachers have had little difficulty in getting visas to address and influence congregations across the country.

A few months ago Oman flagged concern about the growing radicalization of thousands of Muslim workers from India in the Gulf country.

In the south of India the state of Kerala has seen mosques, educational institutions and charitable organizations connected with Saudi Arabia’s conservative ideology gain strength over the years.

Kerala has for many years seen a subtle shift in the way women dress, the use of headscarves, and even the designs adopted for new mosques. In fact, preachers from the Muslim Brotherhood have had access to Kerala in the last several years, where institutions like the Islamic Mission Trust have used foreign funding to set up educational and social institutions to widen their reach and influence.

In the last few years Salafis have managed to take root in large parts of India, including the country’s IT capital, Bangalore, which today boasts more than 40 Salafi mosques that preach ideas repugnant to centuries-old Islamic traditions in India. That it was not easy to set up Salafi mosques due to opposition from existing Islamic groups in Bangalore is well acknowledged by the Salafi trust on its official website: “There were physical fights, social boycott, warnings and torture for the above members for bringing the Salafi Methodology in their locality,” before they managed to build Salafi mosques. Initial opposition later dissolved and Salafis managed to expand their influence in the city, especially among its younger population.

Islam spread across India after the 12th century during the rule of Muslim Sultans, which saw the entry of Sufi saints from Central Asia and Iran. Islam had a softer face when it was preached and propagated by Sufi saints, and its inclusive character in what was then a socially stratified Hindu society led tens of thousands to embrace it. In fact, Sufi shrines became centers of Muslim-Hindu convergence and even today attract Hindus in large number as they stand beside Muslims and pray at the tomb of revered saints.

This trait of many Indian Muslims is frowned upon by the growing ranks of ultra-conservatives. Wahabis advocate numerous Arab cultural norms and practices to replace their local equivalents. Alien names, terminology and equating Arab culture with Islamic culture undermines Islam as it has been practiced in India for centuries. Historically, India and other South Asian countries were never culturally connected with the Arabian peninsula.

Wahabi Islam is sponsored by Saudi Arabia’s monarchical system. Salafis are more conservative and do not accept many of the beliefs of Sunni Muslims like Wahabis. They are also more aggressively opposed to any cultural influence impacting Muslim practices. Their brand of Islam considers all ideas and practices of Muslims that are not in conjunction with the Holy Book as heretical. Any innovation is regarded as promoting polytheism

More and more Muslims, particularly younger adherents, are being attracted by the preaching of ultra-conservative clerics. This is not to say that they all are supporters of radical groups like ISIS and the Taliban. Still, the change in the complexion of discourse within sections of the Muslim population, their responses and the growing assertion of some people that there is a need to abandon a centuries-old brand of South Asian Islam are a natural consequence of years of government indifference, some complicity, and a failure to recognize how Saudi money was actually contributing to a change in the way many Indian Muslims think.

There are now suggestions that the government keep track of foreign funding of Islamic institutions by putting rigorous checks in place. Intelligence agencies have warned that Wahabi and Salafi preachers from the Gulf be thoroughly screened before Indian visas are issued.

The political environment is currently challenging, with a Hindu right-wing prime minister, Narendra Modi, in office. Well publicized reports of attacks and intimidation of Muslims in some parts of the country by fringe groups claiming to represent the right wing have added to the sense of alienation among India’s largest minority group. Fears have been expressed by security experts and centrist politicians that such incidents are pushing young Muslims closer to the ultra-conservatives and contribute to their radicalization.

Sunil Raman is a Delhi-based journalist and author. In the last two decades he has worked with leading media organizations including the BBC World Service and The Economic Times in Delhi, London and Bangalore.