The standoff at New Delhi’s famous Jawaharlal Nehru University (JNU) that has transfixed India has nothing of the routine campus controversy about it. Following the arrest of a student leader, India’s Hindu nationalist BJP government now finds itself facing down a large coalition of progressive groups laying claim to the idea of an India where the right to dissent is foundational. 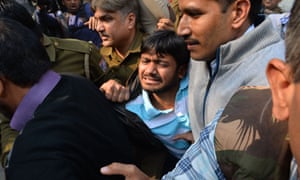 The hardline home minister, Rajnath Singh, believes otherwise, announcing that those who question India’s integrity “will not be tolerated or spared”. Questioning the Indian state’s actions in places such as Kashmir, in short, is strictly off menu. This face-off between state repression and intellectual freedom, which has been some time in the making, may well turn out to be a watershed moment for the country.

A famously contentious campus synonymous in India with critical thinking and vociferous debate, JNU has long been in the sights of the Hindu right, many of whom want nothing more than for it to be shut down. Its student union president, Kanhaiya Kumar, was arrested last week in the wake of a public meeting held on the anniversary of the controversial 2013 execution ofMohammed Afzal Guru, accused of the 2001 Indian parliament attack. After that meeting Kumar gave a wide-ranging speech that was remarkable not for the “anti-nationalism” with which he has been charged but for his impassioned insistence on the need to uphold the Indian constitution.

The ferocity of his criticism was reserved for those who he said were undermining this very constitution, the forces of Hindutva (Hindu-ness) that form the backbone of the BJP government. “We don’t need a patriotism certificate,” he said. “We love this country.” From a poor, working-class background himself, Kumar noted: “We fight for the 80% poor population of this country.” Addressing a topic all too familiar to students in Britain, he also attacked government cuts to higher education budgets and the steady decline of resources, including financial support, available to students.

In a shocking move – police are not allowed on to Indian university campuses without the permission of the vice-chancellor, precisely in order to safeguard dissent – Kumar was arrested under one of India’s many outdated pieces of legislation (which include, notoriously, a law criminalising homosexuality). The “sedition” law, intended to prevent anti-colonial resistance, prohibits inciting “disaffection” towards the government, and many in India’s freedom struggle, including Gandhi, were detained under its auspices. In recent years it has been used liberally to constrain those who would challenge the transgressions of the postcolonial state.

Kumar had noted correctly that the forces of “Hindu India” now most vociferous in laying claim to true patriotism were not only notably absent in the actual freedom struggle but were often to be seen collaborating with the British. Subject now to open thuggery – as well as state force, there have been astonishing scenes of lawyers beating up JNU students in court – dissenters have been arrested or are being hunted down. Students and teachers have responded by shutting down the university, while normally cautious broadsheets are issuing unusually critical editorials warning the government not to let events escalate. Student unions across the country and from as far away as South Africa have condemned the arrests, as have hundreds of academics from Britain, the US and beyond.

So what is really at stake here? In short, it is a struggle between those who would lay claim to India as a democratic, heterogeneous, inclusive and at least incipiently egalitarian national project, and those for whom nationalism has devolved into a lethal cocktail of aggressive religious assertion and equally ferocious unbridled capitalist growth, where neither the body count nor widening inequality indices matter.

It is worth noting that this flashpoint has followed and is connected to another equally important campus movement inspired by the death of the Dalit scholar Rohit Vemula at the University of Hyderabad, who killed himself: an event that has blown open India’s persistent and disgraceful caste inequalities, with upper castes, much like the white well-off of Britain, disproportionately dominating universities and the media as well as lucrative corporate positions. To criticise the Hindu nationalism that governs India today is also to note its roots in the continued domination of Indian institutions by Brahmins and other upper castes. This faultline is now more visible than ever, and addressing it has become a matter of urgency.

For those committed to the idea of India as essentially a Hindu country, which includes many in the government of the prime minister, Narendra Modi, the list of potential “anti-nationals” appears to be compendious. It seems to include everyone from Muslim, Dalit, Christian, leftwing and liberal activists to those who question the Indian state’s actions in Kashmir or suggest that religious intolerance isn’t a good idea.

Until recently, this dispensation has had the benefit of an acquiescent, even cheerleading media, but that may be changing. Today, with journalists also facing down manhandling and violence from government supporters, even as some of their more rabid colleagues appear to be inciting it against JNU students, the situation reminds many of the horrors of the 1975-77 state of emergency. Now, as then, India is poised on the brink of a choice between the dangers of authoritarianism and its historic commitment to dissent. It is essential that the latter prevails. (theguardian)