New Delhi: A delegation of Indian Union Muslim League led by its National President and Member of Parliament E. Ahamed handed over a Memorandum signed by about one crore people to the President Pranabd Mukherjee regarding repeal of Article 44 of the Constitution of India. 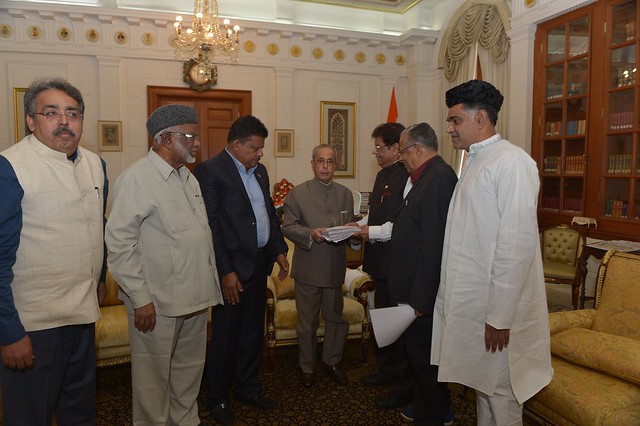 In September last year IUML had launched nationwide campaign to raise awareness about attempts to marginalize the minorities and to collect one crore signatures against implementation of Uniform Civil Code.

On Monday a delegation consisted of E.T. Mohamed Basheer, M.P., P.V. Abdul Wahab, M.P., Prof. Kader Mohideen, Ex. M.P. and National General Secretary, IUML, Abdul Basith, Ex. MLA, Tamil Nadu and Khurram Anis Omer, Secretary, IUML, on behalf of about one crore signatories presented a memorandum to President Mukherjee urging that the Article 44, a basis for Uniform Civil Code, is against the sovereignty, integrity and unity of the country and hence needs to be repealed.

Article- 44 of the Constitution reads: “The State shall endeavour to secure for the citizens a ‘UNIFORM CIVIL CODE’ throughout the territory of India”.

The preamble of the Constitution of India declares the freedom to every citizen to follow his conscience, beliefs and worships. Articles 25 and 26 of the Constitution of India confer upon every citizen the fundamental right to freely profess, practise and propagate the religion of his own choice and for administration of such religious institutions. Article 51-A confers a fundamental duty to every citizen “to promote harmony and the spirit of common brotherhood amongst all the people of India transcending religious, linguistic and regional or sectional diversities”.

Per contra Article- 44 of the Constitution is totally contradictory to the above stated fundamental rights and duties enshrined in our Constitution.

To save our Constitution of India, to defend the fundamental rights of our citizens, to protect the rich traditions of unity and integrity of this nation, and to maintain the communal amity and brotherhood of our people, the delegation has requested the Hon’ble President to initiate appropriate steps to repeal Article 44 of the Constitution of India by amending the same suitably. (TCN)