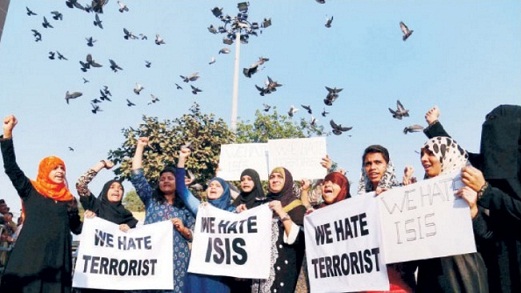 First, there were fatwas against terrorism and ISIS.

Now, Indian Muslims have taken to the streets, to raise their voice against the outfit.

This is not a lone protest. It is part of a campaign. The reason is that many Muslims now increasingly feel that just condemning ISIS is not enough, but there is need to go to the street and say it, strongly, so that the message goes out. 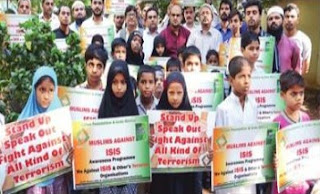 Specially, in the wake of arrests of Muslim youths on suspicion of links with extremist groups, the Muslim community has decided to come out strongly and raise their voice.

Muslims in general are disgusted by the acts of groups like ‘Islamic State’, which is also known as ‘Daaesh’, ISIS or ISIL. Also, with media reports continuously giving wide coverage to inhuman acts of ISIS, community is deeply concerned. The complexities of the situation in Syria and other countries of Middle East aren’t clear to everyone.

However, the manner in which ISIS has been executing people and using Islamic symbols, distorting the message of the religion, has disturbed Muslims. Earlier, over 1,000 Muslim religious heads, clerics and scholars had issued a joint fatwa, denouncing ISIS.

It termed the activities of the militia is inhuman and against the teachings of Islam. A copy of the text was sent to United Nations (UNO) too.

Now, a big campaign has been launched. It will mostly focus in Western part of India, where there are reports of many Muslim youths getting indoctrinated and affected by ISIS’ propaganda.

Mumbai-based Sahas Foundation and Urdu Markaz are jointly organising the campaign. The aim is that parents also take care that the children don’t get astray. A report about this campaign is published in The Times of India.