In a fiery speech on Wednesday evening, Minister for Human Resources Development Smriti Irani said in Parliament that the Telangana police told the state High Court that no doctor was allowed near Rohith Vemula’s body. She also said that no doctor had gone near Rohith’s body until 6.30 am the next day. However, documents available with The News Minute show that this report quoted by Irani is not accurate.

In Parliament, Irani said: “This is what the police said. No one allowed a doctor near this child, to revive this child. Instead, his body was used as a political tool.”

On January 17, Rohith’s body was found between 6.30 and 7 pm in Room No. 207 of the New Research Scholars Hostel on the Hyderabad University campus. The room belonged to Rohith’s friend Uma Maheshwar. Security personnel and students found Rohith hanging from the ceiling fan and it is believed that one of the students called the doctor on duty Chief Medical Officer M Rajshree.

“Security officials found the body in NRS hostel room. I got a call around 7:20 pm and I rushed to the hostel to examine the body. By the time I reached the body was removed from the ceiling fan. Within 10 minutes we declared him dead. I also informed the VC immediately. He asked me whether there was any possibility of reviving Rohith. I was there till 3 am that day,” Dr. Rajshree told The News Minute. 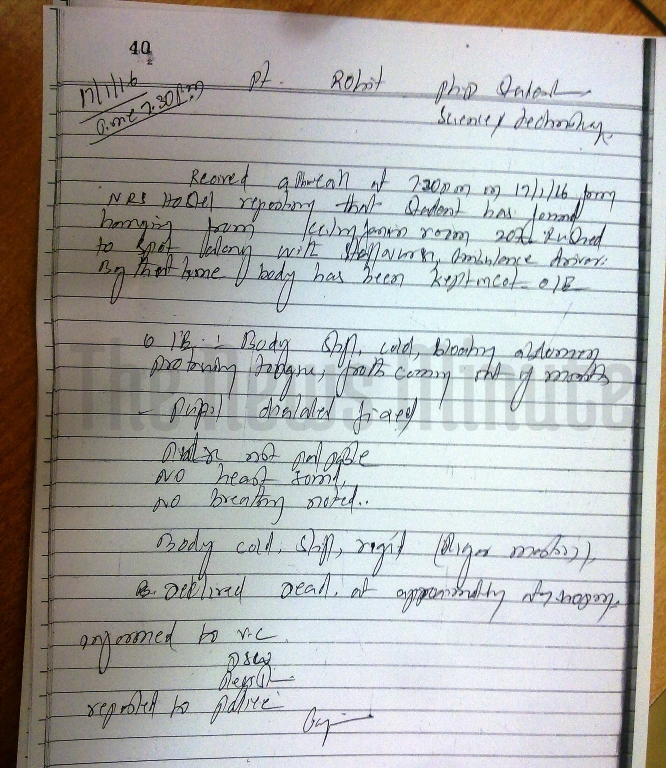 (The page of the health book of the university, recording the conditions under which Rohith’s body was found, and certifying his death)

The document says: “Body … cold, bloody abdomen, protruding tongue, froth coming out of the mouth.” The entry also says that the pupils were dilated, that there was “no heart sound” and no sounds of breathing.

Irani also quoted the Telangana police report and said: “According to a report submitted to the Telangana high court, the police had reached Rohith’s hostel at 7:20 pm when they found the body. The police said that when they reached the hostel, they found the room open and the dead body was on the table. A hand written suicide note was found. The suicide note that was left behind does not blame anyone. This is not my submission. This is what the police said.”

Continuing to quote the same document, she said: “No one allowed a doctor near this child, to revive this child. Instead, his body was used as a political tool. No police was allowed till 6:30 am the following morning. Who tried to help this child? The ones who passed judgement are not the ones appointed by the BLP-led NDA but by the Congress party.” (You can listen to the full speech, here or read the text here.)

However, Dr. Rajshree says that when she examined Rohith’s body, police were present. Students who were present that evening, too told The News Minute that police were present at the time. A video taken by a student shows Dr Rajshree and policemen next to a bed on which Rohith Vemula’s body had been placed. Video link here.

Police had earlier told the media that the body was allowed to be taken for post-mortem till January 18th morning.

Ravindra Kumar, who is also a Chief Medical Officer told The News Minute, “My duty doctor at the time was very much there when Rohith body was found. Duty doctor Rajshree examined Rohith’s body and found that Rohith was dead. When his death was confirmed I also called the VC to inform him but he never answered the phone.”

Dontha Prashanth, one of the four suspended students and a friend of Rohith’s told TNM that the students strongly condemned Irani’s statements in the Lok Sabha.

“We all were very much present at the NRS hostel where Rohith’s body was found. Duty doctor Rajshree immediately rushed to the hostel  to examine Rohith’s body soon after she was informed by the security.” (thenewsminute)