At least 10 people have been killed and Sunni mosques firebombed in suspected reprisal attacks following a series of ISIL attacks on Shia Muslims in Iraq that left scores dead. 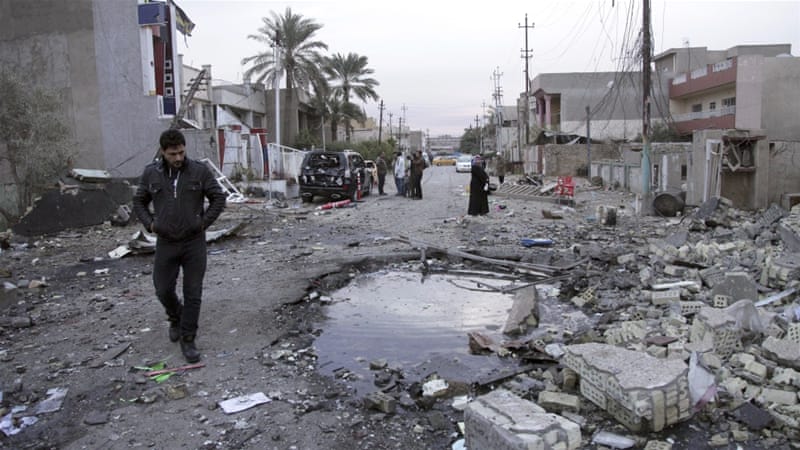 Attackers firebombed nine mosques in Diyala province on Tuesday in what a Sunni leader described as a “heinous criminal act”.

Witnesses told Al Jazeera that Shia militia members were responsible for the attacks in the town of Muqdadiya, 110km northeast of Baghdad.

The fighters sent out messages on loudspeakers calling on Sunni civilians to leave the town within 24 hours or they would be killed.

A day earlier, a wave of attacks claimed by the Islamic State of Iraq and the Levant (ISIL), a hardline Sunni group, targeted mainly Shia areas in Baghdad and Muqdadiya.

Among those killed on Tuesday were two journalists working for the TV channel Al Sharqiya.

Reporter Saif Talal and cameraman Hassan al-Anbaki were shot by militia members in the Diyala town of Abu Saida, the network said.

In another incident, also in Abu Said, the parents of a Sunni imam were shot dead by militia fighters when they went to his home and found out he was not there, witnesses said.

Abdul Latif al-Humaim, acting head of the Sunni Endowment Diwan, called the attacks in Diyala a “heinous criminal act” and urged the Iraqi government to assume its responsibility and track down the perpetrators.

The deadliest attack was in Muqdadiya, where a suicide bomber killed 42 people and injured another 54 at a cafe.

At least 32 people were killed and 58 injured when ISIL fighters detonated explosives and stormed a mall in the Shia neighbourhood of New Baghdad in the capital.

Another seven people were killed in a car bomb attack in the Nahrawan district in the east of Baghdad.

The United Nations envoy for Iraq condemned Monday and Tuesday’s string of attacks and urged all parties to avoid sectarian violence.

“The perpetrators want to incite sectarian violence in a desperate attempt to take the country back into the dark days of sectarian strife,” Jan Kubis, the special representative of the UN Secretary-General for Iraq (SRSG), said.