Church reconciliation and the welfare of Christians in Mideast and Africa on agenda during historic talks held in Cuba. 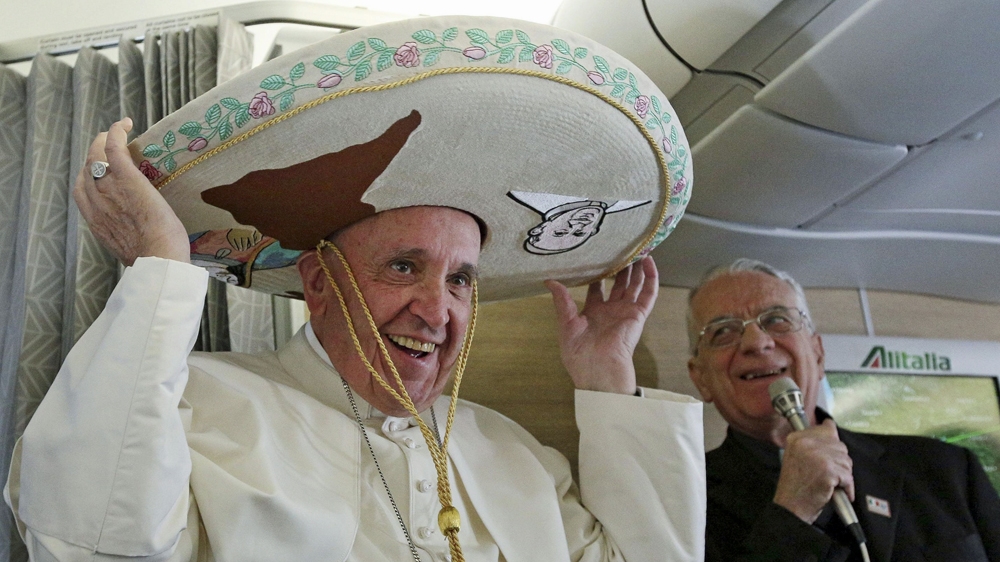 Pope Francis has met with Patriarch Kirill in Cuba, in the first-ever papal meeting with the head of the Russian Orthodox Church in nearly 1,000 years. “Finally!” Francis exclaimed as he embraced Kirill in the small, wood-paneled VIP room of Havana’s airport, where the three-hour encounter was taking place on Friday.

“We are brothers,” Francis added. The two church leaders kissed one another three times on the cheek, and Kirill told the pope through an interpreter: “Now things are easier.” Al Jazeera’s Natasha Ghoneim, reporting from Havana’s airport, said the meeting was seen as a step toward healing the almost 1,000-year-old rift between the two churches.

She said that Francis, who was en route to Mexico, rearranged his schedule to attend the meeting with Kirill, who was already visiting Cuba. “Cuba is a neutral ground, if you will; it has nothing to do with the difficult history between the two churches and president Raul Castro did play a hand in making this happen,” Ghoneim said.

The Vatican is hoping the meeting will improve relations with other Orthodox churches and spur progress in dialogue over theological differences that have divided East from West ever since the Great Schism of 1054 split Christianity.

Following the meeting, Francis and Kirill issued a joint declaration expressing their concern about the plight of Christians in Iraq and Syria who are being killed and driven from their homes by the Islamic State of Iraq and the Levant (ISIL).

In a joint appearance, Francis told reporters he was “grateful for the humility” of Kirill, while praising the Cuban president for hosting the talks.

“If he continues this way, Cuba will become the capital of unity.” Ghoneim said that despite the existing divisions, the focus of the talks in Havana was on unity.

“The common goal here for both churches is to take a look at what’s happening in the Middle East, as well as Africa. They believe that in those two spots Christians are really at risk of being persecuted and that’s why the two sides came together in the spirit of collaboration, in the hope to work towards a solution to help Christians in those areas.”

The two churches split in the Great Schism of 1054 and have remained estranged over a host of issues, including the primacy of the pope and, more recently, Russian Orthodox accusations that the Catholic Church was poaching converts in former Soviet lands.

Those tensions have prevented previous popes from ever meeting with the Russian patriarch, even though the Vatican has long insisted that it was merely ministering to tiny Catholic communities. Immediately after his meeting with Kirill, the pontiff will fly to Mexico for a week-long tour.

Among his stops will be the crime-plagued Mexico City suburb of Ecatepec, the mainly indigenous southern state of Chiapas and the city of Ciudad Juarez.