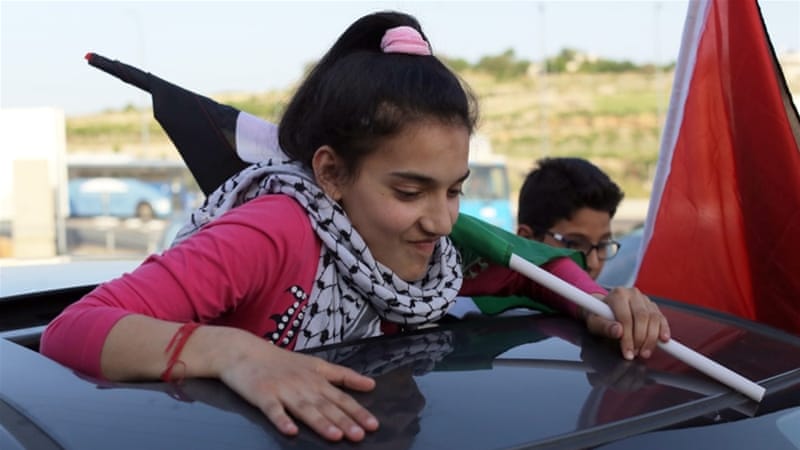 D, arrested on February 9 near the illegal Israeli settlement of Karmei Tzur, was convicted of attempted voluntary manslaughter and illegal possession of a knife in a plea bargain by Israel’s military court days after her detention. She was sentenced to 4.5 months in Israeli military prison, and completed more than half of her sentence.

While Israeli citizens are governed by Israeli civil law and can only be imprisoned from the age of 14, Israeli military law, which oversees Palestinians in the occupied West Bank, allows children as young as 12 to serve jail time. According to prisoners’ rights group Addameer, 438 Palestinian minors are currently serving time in Israeli prisons, 98 of whom are under 16.

On April 24, after travelling several hours from the northern Jbara checkpoint near Tulkarem to her hometown in the southern occupied West Bank district of Hebron, D arrived home with her family for the first time in 75 days. Upon her arrival in Halhul village, she was greeted by hundreds of neighbours and family members, waving the Palestinian flag and cheering for her return.

Al Jazeera spoke with D after her release.

Al Jazeera: Do you know that you are being described as the youngest Palestinian girl to be imprisoned by Israel?

D* al-Wawi: Yes, I heard that, but there are other children in the prison too. I left friends behind; some were 13 and 14 years old. We sang together and stuck together the whole time I was in prison and they helped me, so I’m not the only young one.

Of course I am happy to be free, but I am sad at the same time because there are still children in prison and I know what it is like now.

Al Jazeera: What was it like to be in prison?

D: It was scary and I missed my parents. My mom came to visit me twice and when she left, I felt like I was taken away again.

Al Jazeera: What was the scariest part of the two months in detention?

D: The scariest part was at the beginning of it. On the bus when they transported me from Hasharon Prison to Ramla Prison and then to Ofer military court to see the judge. The seats on the bus were made of hard metal and my legs were chained together and my hands were cuffed. It was cold in February and I didn’t have a jacket. It was freezing and I was alone and I didn’t know what would happen.

When the Israeli soldiers arrested me, they kicked me a lot. One of the soldiers kicked me hard in my back, and then when I was lying on the ground, another soldier jumped on top of me and that caused me a lot of pain for a long time.

Al Jazeera: Were you interrogated?

D: Yes, the interrogation was also very scary. There were like five men questioning me at the same time, it was confusing and I was also alone then too. They were screaming at me angrily and laughing at me as if I was a joke, all of them. I just wanted to go home.

Al Jazeera: Did you think then that the court would sentence you to time in jail?

D : I didn’t think the judge would send me to prison because I’m a kid. I thought I would go to the judge and go home with my parents on the same day, but the judge said I would stay in the prison for four months and I didn’t know what to do.

Al Jazeera: Were you ever physically hurt when you were in prison?

D: In the prison no, but when the Israeli soldiers arrested me, they kicked me a lot. One of the soldiers kicked me hard in my back, and then when I was lying on the ground, another soldier jumped on top of me and that caused me a lot of pain for a long time.

Al Jazeera: How did you spend time in prison and who did you see there?

D:  I had an Arabic teacher whom I liked a lot. There were also aunt Dunya and aunt Yasmine, who were sweet, took care of me and bought me chocolate. I also learned hand embroidery. I made my mother a book that had “sweetest mom” on it in embroidery.

Al Jazeera: What did it feel like when your handcuffs were taken off and you saw your parents again?

D: When my handcuffs were taken off, it was like I could breathe again, and when I saw my parents, I was ecstatic. I have never been happier in my entire life. I am very, very happy to be home, but I will be happier when things go back to normal.