France has been accused of devaluing its highest national honour after the Legion of Honour was quietly awarded to the Crown Prince of Saudi Arabia on a visit to Paris. 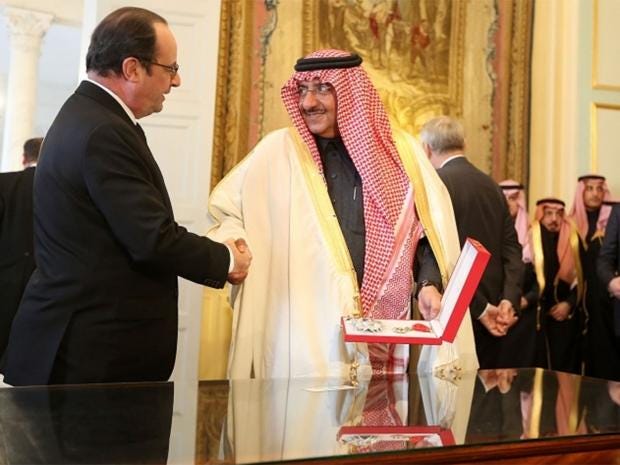 The French government was among the most vocal outside the Middle East in its condemnation of Saudi mass executions earlier this year, calling the kingdom’s killing of 47 people “deeply deplorable”.

Yet almost two months to the day after that statement was issued, President François Hollande awarded his nation’s most prestigious award to the heir to the Saudi throne, Prince Mohammed bin Naif.

The Crown Prince’s visit to the Elysee Palace actually took place on Friday 4 March, the same day as Mr Hollande held talks with Angela Merkel about how to cope with the refugee crisis.

But while Ms Merkel’s trip featured in a number of videos and photos posted online by the Elysee social media team, any reference or evidence of the Saudi delegation was conspicuously absent.

That the Prince even received the award was only confirmed by Mr Hollande’s entourage on Sunday afternoon. Officials sought to play it down, telling Le Monde it was “common protocol” to issue visiting dignitaries with the honour.

But while in France the decoration was done, as media outlets put it, “with discretion”, the government-owned Saudi news agency SPA hailed the honour as recognition for the prince’s “great efforts in the region and world for combating extremism and terrorism”.

The Legion of Honour was founded by Napoleon in 1802, and is regarded as among the first and most prestigious modern orders of merit in the world.